An 86 page updated history is now available for viewing

Early History to the 12th Century

The church rests on what appears to be a substantial but low East/West earthwork on which is situated an early Bronze Age barrow.  The latter was excavated in 1885 by Cunnington   who discovered an Early Bronze Age cremation at a low level, a Saxon coffin burial somewhat higher and several medieval burials near the top of the mound. A survey in 2013  discovered a hidden ditch encompassing the mound, with two overlapping structures in the adjacent "eastern paddock" superimposed over it.  These latter structures are possibly a "horse pool" mentioned in the 1842 Tithe apportionment file. It is interesting to note that the eastern wall of the 13th chancel lies very close to the edge of the barrow ring ditch.  The presence of this all-encompassing ditch potentially places the mound in the category of a rare "bell barrow", which is of considerable archaeological significance.

The whole site lies within a mediaeval manorial complex with what appears to be a large agricultural assemblage close to the west end of the church in the adjoining field.  Surveys and archaeological digs confirm their presence.  Dunn surmises the presence of a Saxon church on the site (with no evidence), but a geophysical survey  (1999) revealed a "small rectangular building" somewhere within the churchyard boundary (although this may well be the remains of a shed used to house the parish bier).  A more complete understanding of the site is revealed in the latest report (2020). Click here for PDF file.

In the middle to late 12th C, the church, together with St George’s and accompanying estates were  donated to the Abbey of Bec by Maud of Wallingford (which see).

12th Century  (Norman Building)
Given the uncertain times (the Anarchy, 1135 - 1153), it is perhaps surprising that any construction was undertaken, but the Norman arcades at St Andrew were built in about 1130 – 1150, with the aisles being added soon after.  Ponting, 1894 comments "practically the whole of the walls of the south aisle and the western part of the north aisle remain unaltered, including the south doorway".  There would almost certainly have been a chancel at this period and Dunn speculates that either a Saxon chancel (wooden?) was initially retained, or else a small Norman style with apse and round-headed chancel arch was built.  Dunn also suggests that the double piscina formed from a Norman capital in the sanctuary could, possibly, have come from this earlier chancel.  The nave initially might have had a low clerestory.

The recently discovered ditch around the Bronze Age mound lies very close to the eastern wall of the 13th C chancel, whether the ditch would have been evident in the 12 th century is not possible tell, but its position might have had some influence in the siting and size of the current chancel


Early in the 13th century a larger chancel was erected, possibly at the behest of the Abbey and is essentially the form seen today, apart from the arch.  It is probable that the small door on the left (north) of the chancel led to a rood loft or screen, the last vestiges of which were removed in the 1849 Butterfield restoration.  This new chancel would have been far taller than the nave so as Dunn points out, the church would have had a strange asymmetry until the rebuilding of the nave in the 15th century.  Interestingly, Glynne in 1845 noted that "there was no chancel arch", so either the original Norman opening had been retained or else the 13th century opening was of a form which Glynne did not consider to be an arch.

By the late 13th century the French wars had increasingly interrupted the link between Ogbourne Priory and the Abbey of Bec, and the Prior was forced to pay increasingly large "farms" to the Crown (for example £500 in 1294, indicating the value of the Bailiwick (or Priory) of Ogbourne, which included all the Abbey’s holdings in England).  By 1364 the Abbey nominated William de St Vaast as Proctor General in England for a very long term to overcome the difficulties in communication.  The Great Schism finally severed Ogbourne from the Abbey, but de St Vaast held the estates together until his death in 1404/1405.

The building might now have presented this somewhat ungainly shape: 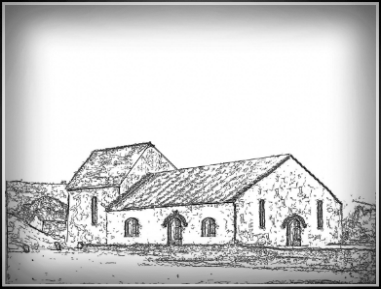 Thus from 1421 onwards the Dean and Canons of St Georges Chapel, Windsor, controlled St Andrew (and St George) and from at least 1461 they leased out the two chancels (the first archived lease).  The first lessee was a John Mychell of Marleborogh (sic), "marchaunt".  It is interesting to note that one of the Canons at Windsor at this time was a William Mychell.  The lessees paid a mixture of cash and goods to the Dean and Canons, whilst undertaking responsibility for the upkeep and repair of the chancel.  A list of lessees from 1461 to 1866 is detailed.

It is not clear whether the chancel was leased out between 1421 and 1461, but in 1440 a transformation occurred: building of the tower, raising the height of the aisles and the insertion (or raising) of a clerestory.  Whether this  was  at the behest of St George’s Windsor, or of a munificent patron is not at present known.  It was initially thought that the presence of manorial buildings to the west of the church forced the parishoners (or patrons) to build the tower within the western Norman arcade.  A fine tierceron vaulted roof was installed, a unique feature in a church of this size, indicating that, whoever the patron was it was someone of substance.  A large part of the north aisle was rebuilt at this time.

However, a far more interesting potential scenario hasnow been revealed.  In 1437 Henry VI (Lancastrian) granted the Ogbourne Manors and Priories (i.e. estate lands) to Sir John St Lo  "one beloved of us , one of the armour bearers for our body…" during his lifetime with a reversion to Cambridge University on his death, which occurred in 1439.  In 1441 the manors were apparently restored to the Crown and St Andrew formed part of the Foundation Grant to King’s College Cambridge.  Henry VI was deposed by Edward IV of York in 1461 and Edward resumed the estates, granting Ogbourne St Andrew to London Charterhouse.  With the turbulence of the Wars of the Roses, it wasn’t until 1490 or thereabouts that a Parliamentary Commission confirmed King’s College’s claim and restored the estates, with an annuity payable by King's to Charterhouse.

From this it might appear that Sir John St Lo (who was de facto Lord of the Manor) might conceivably be the benefactor who raised the tower, but that the convoluted ownership of the land precluded any extension into "Court Close" (i.e. "west paddock").  More research is required to substantiate this claim, although Sir John St Lo was clearly a man of considerable power and substance, being, amongst other things Constable of Bristol Castle.

Dunn suggests that the font is from this period, Ponting is more uncertain – "probably only the middle part is old".  The original position of the font is unknown.  The current tenor bell was installed at this time.

The church now was in its final form: 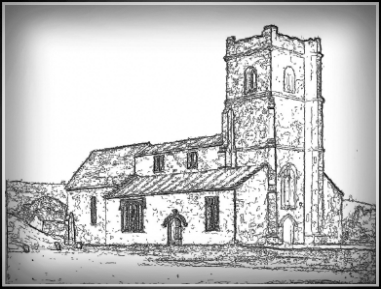 16th & 17th Centuries
During the 16 th and early 17 th centuries the rood and screen were removed, the stone altars broken up, the stoup broken off and all decoration removed together with pictures and statues .  The peal of bells was increased to 4 by the middle of the 16 th C, but the structure of the tower was compromised and was not repaired until 1914.

18 th Century
The 18th century saw the rebuilding of the east walls of the aisles, with the removal of the windows.  A gallery was erected against the tower arch and a porch added to the south door.  The three painted panels currently in the south aisle were probably arrayed behind the altar, although in 1847 Butterfield inferred that the Ten Commandments panel was associated with the gallery.  A fifth bell was added in 1719.

19th & 20th Centuries
Two major schemes of work were carried out in the 19th century, followed by an even more extensive rebuilding in 1914.  Later in the 20th century further work on the roof was carried out, as well as changes to the heating.  The pulpit was also resited.

Victorian period to WWI
In a letter dated 13/10/1841 Rev. Heighway wrote to the Dean and Canons of Windsor that "the church was in good repair", which, given the sequence of repairs undertaken during this period to 1914 seems a somewhat optimistic statement and in 1845 in an overview of the church Sir Stephen Glynne wrote "The altar is of deal, very mean and covered in a dirty green baize" – hardly a ringing endorsement of the state of the building in general.  In fact Glynne gives us some insight into the general appearance of the church, which in broad architectural terms, other than the chancel arch, is little different from today excepting:

"The interior of the nave, though lofty, is confined and much encumbered with pews, besides the encroachment of a hideous gallery against the tower arch, which further contracts the already contracted nave"  (author’s italics)
"There is no chancel arch, but there are stone brackets on the wall which must have supported the screen."  The first point implies a very cramped interior, whilst the second confirms that a rood screen must have been in place at some time, and that perhaps the narrow doorway in the Chancel northern pillar might have led to stairs to access the screen.  The stone brackets were obviously removed in the Butterfield restoration (below).

There have been three major attempts at rebuilding: 1847 to 1849; 1873 and 1914.  What is surprising is the calibre of the three architects involved:
Wm Butterfield  1847-1849
Ewan Christian  1873
Charles Ponting  1914
All were either eminent or highly regarded in their profession, with impressive lists of buildings to their credit.  Whether their involvement was serendipitous or a result of personal recommendations is not clear.

There is definitive documentation for the last two restorations; less, at present, for the earliest (Butterfield’s).  The problem of tracing records is compounded by the complex governance of the church and lands.  The latter were under King’s College Cambridge from 1441 to 1928, whilst the chancel was the responsibility of the Dean and Canons of St George’s chapel, Windsor from the 1421 until the mid 19 th C (precise date to be confirmed) when the Ecclesiastical Commissioners took over; the Dean and Canon of Windsor remained patrons, although the overall control of the church was seemingly passed to the Dean of Salisbury about this time.  The Nave and aisles were the responsibility of the parish, often with help from the patrons.

If that wasn’t complicated enough, the benefice seems to have been leased out by the Dean and Canons from at least 1461 to lay lessees (Rectors).  From 1810 to 1842 (the year of his death) for example, the lessee, Rev W m Liddiard apparently lived in Ireland.  In 1845, 1852 and 1859 the joint lessees were Henry Davis of Bath and Rev Biedermann of Dauntsey who were Liddiard’s trustees, and who presumably were involved in  the restoration and Butterfield’s input, although no documentation and very little reference to this period has yet been found.  Given that the lessees were responsible for chancel repairs, many churches were in desperate need of repair by the mid 19th century.  For example Dunn notes that, in referring to Ogbourne St George: "the church had fallen into a bad state of decay" which led to heavy rebuilding between 1863 & 1865 and yet again in 1873 (to be investigated).