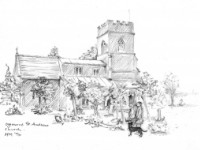 Parish > Figures from the past

A recent chance encounter in St Andrew’s churchyard with some Dutch visitors looking for a tombstone has led to the rediscovery of a forgotten figure – Obadiah Sedgwick.  There are no known memorials to him extant in St Andrew, but it is claimed he is buried next to his father, Josiah, in the church’s chancel.  He was a Puritan "divine", preached to Parliament, was a "trier" and "expurgator" for Oliver Cromwell and wrote twenty books, which are still avidly read in certain parts of Holland.

Obadiah was born in 1600 in Marlborough, where his father was vicar at St Peter’s.  They moved to St Andrew in 1604 and Obadiah went up to Queen’s College Oxford at the age of nineteen and then onto Magdalen.  At the age of twenty six he became a tutor and took Holy Orders, becoming Chaplain to Baron Vere of Tilbury who he accompanied to the Low Countries.

In 1630 he was a lecturer in London, where his extreme puritanism led him into trouble.  However in 1639 he succeeded to the vicarage at Coggeshall and then back to London, where he became a preacher against episcopacy:
‘in hot weather to unbutton his doublet in the pulpit, that his breath might be the longer.’

In the autumn of 1642 he was chaplain to a regiment of foot and by 1643 was a member of the Westminster Assembly.  In the same year was appointed a licenser of the press and he spoke at the Guildhall in favour of the league with Scotland for the prosecution of the war. In a sermon of September 1644 he preached for ‘cutting off delinquents.’ He held for a short time the rectory of St Andrew’s, Holborn, before he was appointed to the rectory of St. Paul’s, Covent Garden, and resigned Coggeshall.

He was a member of parliamentary presbyterianism; but his ecclesiastical views were not rigid, for in 1654 he was appointed one of Cromwell’s ‘triers,’ and in August of the same year was a clerical assistant to the ‘expurgators.’ His health failing, he resigned St Paul’s in 1656.  He was a man of property, being lord of the manor of Ashmansworth, Hampshire. Retiring to Marlborough, he died there at the beginning of January 1658, and was buried near his father, in the chancel of Ogbourne St. Andrew.